Zelensky Reveals His Plans For Ukraine! In Trouble For His Close Relationship With Kholomoisky 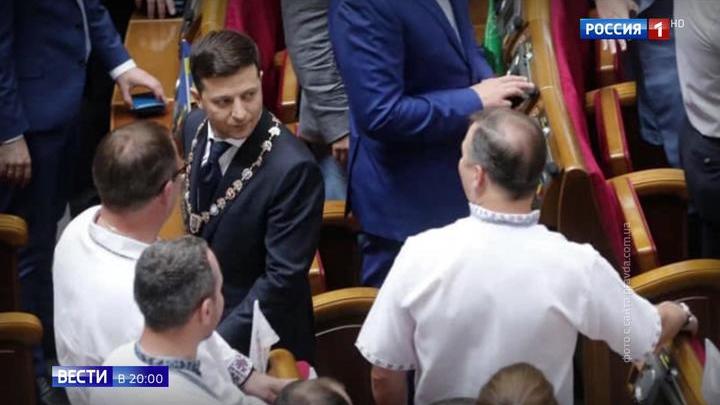 And now, Ukraine, where President Zelensky's decree to dissolve the Verkhovna Rada has gone into effect. Senators are trying to appeal it in court and the CEC stated that it wouldn't be able to print early election ballots in time. Zelensky himself refused to work with the Rada in its current form. He intends to submit all of his bills only to the new legislature parliament. However, while the president waits for the perfect working environment, new issues requiring his actions, or at least participation, are piling up in the country.

Andrey Grigoryev with the details on the chances that he will participate.

The Independence Monument in the center of Kiev. It was covered in political graffiti since the Maidan. Today, it was washed from the base to the golden tridents, which was supposed to symbolize the beginning of a new era. Zelensky shared his vision of the new era today at the Digital Technology Forum.

Vladimir Zelensky, President of Ukraine: "We want to make a country in a smartphone. You have actual control over what bills are submitted. You can change them. You control what dudes, sorry about that word but that's who they are so far, what people, let's hope they're people, get elected and how to withdraw them".

When asked about negotiations with Russia, Zelensky responded negatively. He finds it more convenient to fight political battles on the digital field. The exchange of photo-attacks on social media: Lyashko posted a photo of the president giving him a mean look Zelensky responded with a photo of Lyashko as an average Ukrainian official. It would seem that Zelensky has dissolved the Verkhovna Rada. Today, the decree was published in the governmental newspaper and went into effect. However, senators are going to appeal it in court.

Viktor Medvedchuk, Opposition Platform: "The Rada must be dissolved. But it must be done in strict compliance with the rules of the Constitution. In this case, the Constitution was violated and the reason I'm sure of it is that I'm the author of those articles".

Zelensky's predecessor is asked if the president's actions are legit. Poroshenko demonstratively strolls around a book expo, and not a digital one.

Pyotr Poroshenko, former President of Ukraine: "We see that his team began with violating the Constitution. That's definitely a reason to be concerned. But I'd also like to say that every politician must always be ready to make a choice".

Zelensky's plans may be disrupted by blatant bureaucratic delays. For example, the CEC already stated that it wouldn't be able to even print out the ballots in time for the early parliamentary elections on July 21st.

Tatiana Slipanchuk, CEC: “Speaking of state procurement, observing all tender procedures, we won't be able to do it in two months. Some productions come to an end; I'm talking about the Game of Thrones. Our production continues".

The West carefully follows Zelensky's relationship with the oligarch Kolomoisky.

"Igor Kolomoisky is under an investigation by the FBI. He' has now returned to Ukraine from his exile in Israel and the first thing he did was threaten American citizens. This is a real test for the president. Will he be arrested?"

American citizens Igor Fruman and Lev Parnas, here's their photo with President Trump and Vice President Pence, said that Kolomoisky was going to get them murdered and hide in Ukraine, where he's possibly the richest and definitely the most influential businessman.

"His Privat Business Group is associated with about 1,000 companies and 40 key personalities".

The internet is not only discussing the video exposing Kolomoisky's assets, but also a petition to impeach Zelensky. It already has the required 25,000 votes, and now the President of Ukraine himself will have to consider it.