Milestone Bridge Over Amur River in Far East Completed! Russia and China Now Closer Than Ever! 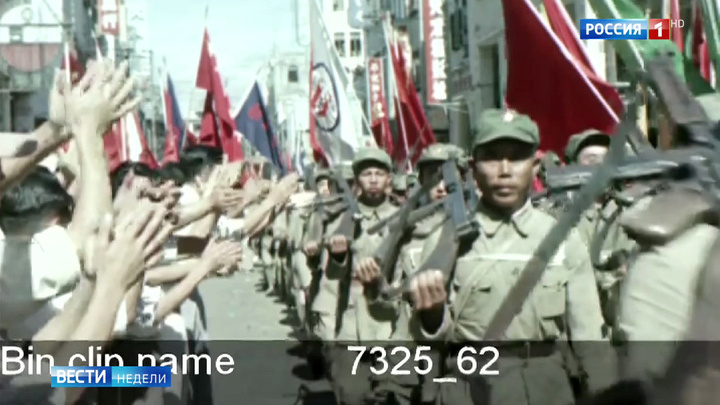 A milestone event for Russia and China has taken place. Last Friday, the two parts of the automobile bridge across the Amur, which connected Russian Blagoveshchensk and Chinese Heihe, were solemnly joined. It took three years to build the bridge and join the two shores. Russia and China built 1,770 feet on each side. For Russia, another bridge is yet another symbol of the country's spatial development which Putin mentioned in his address. For China, it's another way to its northern neighbor.

By the way, Russia and China celebrate an important date this year — the 70th anniversary of diplomatic relations. It's symbolic that just these days, Alexey Denisov, the head of the History Channel, found unique archive footage in the Russian State Documentary Film and Photo Archive. In fact, this video archive about China was made by the best Soviet videographers following Stalin's personal instructions.

Alexey Denisov has the details of this never before seen footage.

This unique historical footage was inaccessible to researchers for decades because after Stalin's death, it was under a special regime of storage. 18 leading Soviet videographers visited all of the provinces of revolutionary China in the early 50s. Many of them were awarded the Stalin Prize for that footage. Employees of the Russian State Documentary Film and Photo Archive carefully preserved this invaluable material for almost 70 years. The film is now undergoing a thorough restoration. But we have the opportunity to show part of the recovered material for the first time. What's exciting is that all of these film chronicles of China were recorded on color film by order of Stalin.

This is the footage of the civil war that Chinese communists waged against Chiang Kai-shek's Kuomintang troops. Some of it was filmed by our videographers during the hostilities. Some of it was recreated using staged photography, with the People’s Liberation Army of China participating. The army of Chinese communists was supported by the Soviet Union. The Kuomintang's army was supported by the U.S. By order of Soviet high command, Japanese trophy equipment, captured by our troops after the defeat of the Kwantung Army, was handed over to the Chinese People's Liberation Army to reinforce it. This was one of the factors that allowed Mao Zedong to win the civil war.

In 1950, the USSR and the PRC signed a treaty on friendship, union, and mutual assistance. In accordance with it, hundreds of industrial enterprises were built in China with the help of Soviet specialists. Despite the fact that the negatives were kept in boxes for almost 70 years, thanks to the professionalism of the staff of the archive in Krasnogorsk, they're perfectly preserved.

Olga Kolikova, specialist of the archive: “We check if there are any defects on the film, making sure that the perforations are preserved. We check the adhesive joints and clear the dust. If we come across mold, we clear the film of mold using ultrasonic machines.”

This footage of the bombing of Shanghai by Kuomintang air units was filmed by the legendary Soviet videographer Vladislav Mikosha. During WWII, he filmed the defense of Sevastopol and Odessa, the battles for the Caucasus and East Prussia, the liberation of Crimea, the Vistula–Oder Offensive, and the legendary Victory Parade. Some black and white shots taken by him were included in the film Victory of the Chinese People. For this work, in 1951, Mikosha was awarded the Stalin Prize of the first degree.

Natalia Kalantarova, Director of the Russian State Documentary Film and Photo Archive: "This is a special film, indeed. In the archive, we've always treated it in a special way because due to various political reasons, it couldn't be studied. Nevertheless, we treated it very carefully because it was created by great people who are no longer with us. That's why it's preserved. It shows the history of not only China but our country as well".

Along with Vladislav Mikosha, the Chinese video archive was also shot by other renowned filmmakers of Russian documentaries — Sergey Gusev, Pavel Kasatkin, Dmitry Rymarev, Anatoly Krylov, and many others. They all went through the Great Patriotic War. But their exploit, like the exploits of other combat cameramen, every fourth of whom was killed in the war, were never immortalized in any monument. Today, on the initiative of Director of the Russian State Documentary Film and Photo Archive Natalia Kalantarova, with the support of our TV channel and the Union of Cinematographers of Russia, they're creating the first memorial dedicated to our country's combat cameramen.

Natalia Kalantarova: "The design of the monument is ready now. Hearings and public discussions were held. And we'd like it to be installed on the 75th anniversary of the victory over Nazi Germany. Our dream is to have a screen near the monument on which you can broadcast this historical footage for which they often paid with their own lives".

They plan to broadcast the fully restored footage of the Chinese video archive on our TV channel this autumn.