Dying Soviet "Monotowns" to Be Repurposed! The Era of Bleak Industrial Rust Cities is Over! 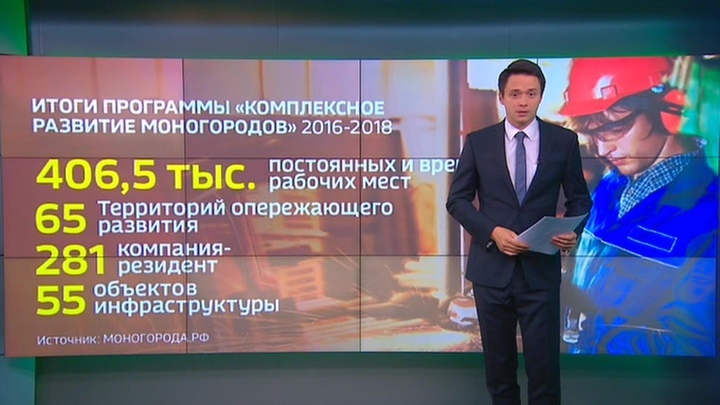 The government is going to diversify a monotowns’ life. The state program should turn the economy of those settlements, which in the Soviet years were built for the sake of a single city-forming enterprise, onto a new premise. The roadmap wasn't created from scratch, it's a continuation of the 2016-2018 program. There were claims to its effectiveness in the Court of Auditors, but there is also a positive development.

For example, over 400,000 permanent and temporary jobs were created at new production facilities. 65 territories of advanced development were opened. Over 280 resident companies were registered. 55 facilities were constructed with co-financing from the monotowns development fund. Infrastructure projects are implemented through public-private partnerships.

Irina Makiyeva — CEO "Fund for the Development of Monotowns": "If we talk about municipalities' largest request, it's, of course, public-private partnerships. Every mayor wants to implement that kind of project in his city. First of all, it's made for the citizens to notice changes more quickly. It's urban infrastructure, lighting, roads, all the things that every resident sees on the streets".

There are currently 317 monotowns in Russia, which contain 10% of the country's population. They're large industrial centers such as Cherepovets and Togliatti, as well as small villages. Most monotowns are located in traditionally industrial regions. These are the Kemerovo, Sverdlovsk, and Chelyabinsk oblasts.

However, it is worth noting that the new program will revise the all-Russian list in 2020. Cherepovets was one of the first cities to implement a program of economic diversification. Many experts believe that it is the first monotown that will cease to be a monotown in the near future. In the city of metallurgists, they bet on small and medium-sized businesses and didn't miss. Over the past three years, about 200 billion rubles of investments have been received here and the unemployment rate remains below 1%.

Elena Avdeeva, Mayor of Cherepovets: "To date, we have over 600 million rubles in revenue from small and medium-sized businesses to the city budget. We also register up to a 10% growth in tax revenue annually. Small and medium-sized businesses are the largest employers in the city of Cherepovets, the number of employees in this area is over 47, 000".

An important tool for attracting investors is a territory of advanced socio-economic development. It offers preferential treatment to its residents. For 10 years, enterprises will not have to pay land or property tax, and the federal profit tax rate will be reduced to zero. Regional profit tax rates may not rise above 5% in the first five years. Insurance contributions to non-budgetary funds have been reduced from the usual 30% to 7.6%. In the city of Kotovsk, Tambov Oblast, one of these territories has been operating since 2017.

Alexey Plakhotnikov, head of the city of Kotovsk: “There are some resident companies that are building their production facilities, plus two residents who are ready to build it. A delegation from China and India visited us yesterday. They will be investors in our territory of advanced socio-economic development. But the main thing is not about money, we were given the ability, the ability to earn money, the ability to make the city better and more efficient.”

The importance of the Development of Monotowns state program is also noted in Nevinnomyssk. Over 10,000 new jobs were created here during the period of the previous development program. Such projects as five steps of improvement made life more comfortable and people stopped leaving the city.

A special fund, part of the VEB Group, provides comprehensive support to monotowns. For example, for investment projects in such areas, it's possible to obtain loans with 0% interest rates. And if earlier the cost of projects should have been no less than 100 million rubles, now the bar has been reduced by 20 times, so the main recipients of funds can be small and medium-sized enterprises. Under the new program, investors will be compensated for the funds spent. They will be able to return the tax payments that'll go to the budget from the constructed enterprises.