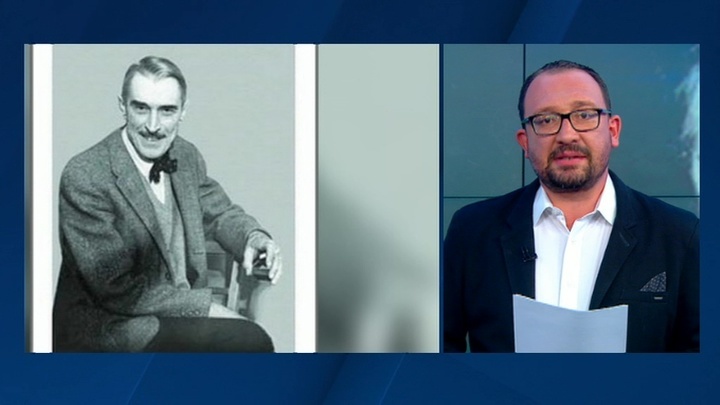 Let's talk about rewriting history in the American manner. In San Francisco, they got to fresco murals by the Russian artist Victor Arnautoff. One will be able to see them only in photos very soon. They'll disappear from George Washington High School's walls. They'll be simply painted over, that is, destroyed. A ton of money has already been allocated.

From the historical point of view, there are no mistakes: the fresco murals depict Indians and black slaves wearing white clothes killed by colonizers, doing hard physical labor. But George Washington himself looks all of it. Did it not take place? Really? It did but not for modern America. The aggressive minority has been taking stabs at the works of art for a long time. According to them, they're intolerant. Now, they achieved what they wanted.

They didn't pay attention to the petition signed by 400 American artists, writers, professors, asking to take hands off Arnautoff's works. This is a good example of the liberal model of social development when nobody cares about the opinion of the majority.

By the way, there was an attempt to save the fresco murals in 1974. The works by Arnautoff were a little fixed then. It worked but not for a long time. Stanislav Bernvald pondered if it's possible to devise something this time.

- Maybe, they could transfer them to a Russian museum?

- Unfortunately, they couldn't because the painting is on the wall. They could only paint it over or scratch it out. They're going to paint over it. Then, there's an opportunity to preserve that work for successors.

Arnautoff was a prominent artist. He shared left-wing views. He vastly criticized George Washington for having slaves. He criticized the genocide of Native Americans. That's what Robert Cherny, a history professor at San Francisco State University, said about him. He was one of the hundreds of research scientists, artists, historians, who stepped up for the preservation of the fresco murals. But this didn't work. The school board insists that the murals should be destroyed as they insult a part of the community.

Sergey Zagraevsky, Member of Russian Academy of Arts: “The situation with that work surprises me at least because it reminds me of our too zealous social media moderators, who banned photos of the Victory Parade, where our servicemen were overthrowing Fascist banners, because of the swastikas on them. This is the same. They don't like that it depicts dead Indians and African Americans heading for somewhere. And that George Washington was a slaveholder.”

Arnautoff made 13 fresco murals at the school. Art experts and the school's alumni see an amazing history lesson in that work. The African Americans and Native Americans, demanding to destroy the murals, see the glorification of the colonial society in them. Art experts explain in plain language that destroying the murals will be like burning books in Germany under Hitler.

“The destruction of this painting will be a distortion of history. For me, it's like coming at a history classroom at George Washington High School and remove all of the books from there. Painting out those works, you won't just remove history but remove the proofs of how George Washington treated indigenous people. He was a slaveholder. If you paint these walls, then how will you prove that?”

A Russian immigrant, a student of the great Mexican artist Diego Rivera, Arnautoff was a committed communist. Living in the U.S., he didn't change his views. One can come across his works made in the style of social realism at subway stations in San Francisco and on the facade of the building of the Main Library. Those defending the fresco murals think that it's the artist's origin that many people are concerned about now. They say that since he's a Russian, so he has no right to deal with American history at all.

Here's a quote from the open letter defending the murals, signed by hundreds of scientists and artists.

“On this account, a Russian immigrant cannot denounce historical wrongs by depicting them critically. We treat historical works of art—using them as tools for managing feelings, rather than as objects of interpretation. We urge the school board to reverse its decision and take all reasonable steps to preserve the mural and to treat it as a work of art and as a representation of our history. We oppose this display of contempt for history.”

According to experts, the destruction of undesirable monuments and works of art, at strong requests by the so-called minority, whether it's national, sexual, or others, is an ordinary thing in the U.S. This is tolerance through destruction. And this isn't the end of the story since their appetite is getting bigger.

Eduard Lozansky, political analyst: “This isn't about paintings and monuments only but paying reparations. Sometimes they begin to discuss that all of the African Americans, who were brought to the country by force and were slaves for many years, their children and families are entitled to receive reparations. This is being discussed.”

On July 8th, the president of the San Francisco Board of Education made it clear that petitions and protests won't influence the decision, which is already taken. Arnautoff's work will be destroyed. It'll be preserved only in the electronic form.