US in Violation of Bioweapons Convention? BOMBSHELL LEAKS of Secret Pentagon Laboratories/Experiments 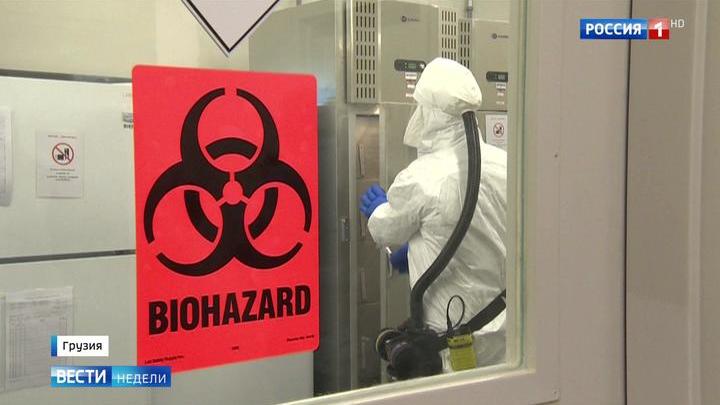 Igor Giorgadze, the former State Security Minister of Georgia, dropped a bombshell last Tuesday when he leaked documents containing information on a laboratory located near Tbilisi named after US Senator Richard Lugar. The lab may have secretly conducted experiments on people, some of which had lethal outcomes. The ex-minister asked US President Donald Trump to start an investigation into the experiments conducted by the laboratory.

Here's Aleksandr Bilibov with the details.

A double security perimeter, a video surveillance system, and barbed wire can be seen around the lab. Although the Lugar lab is officially a civilian facility, it has the security of a top-secret military base. It was built by American soldiers. By various estimates, the Pentagon earmarked up to $500,000 for the project. The laboratory was first opened in 2011. This footage of the ceremony shows former Georgian president Mikheil Saakashvili, and US Senator Richard Lugar, whom the lab was named after, and the US Assistant Secretary of Defense.

According to those living in the area, strange things have been happening at the lab for a long time. Albert Nurbekyan is from a small village, located near the Lugar Center. He told us that ever since the lab opened, people have been experiencing strange symptoms.

Albert Nurbekyan, resident of Alekseevka: "You can see yellow smoke come out of one smokestack and greenish smoke come out of another. There's also often a cloud of black smoke coming out of that large smokestack. Are they burning wood or something? Someone's burning something and lets out the smoke. The only thing we know for sure is that we're getting headaches and our eyesight is deteriorating. We're breathing in that nasty stuff".

The Lugar Center is a high-security lab. Such labs contain strains of anthrax and plague bacteria, as well as fever and other deadly viruses in the amount that would make it possible to wipe out the population of an entire city. Several hundred feet and an old railroad are all that separates the Lugar Center from the village of Alekseevka. The locals don't even remember anymore what it's like to not be sick. There has long been a suspicion that the bio-lab secretly conducts experiments on the locals. However, until now, it was nothing more than rumors. Igor Giorgadze, the former Minister of State Security of Georgia, made headlines this week. He published documents showing that the Lugar Center has been experimenting on people for years.

Igor Giorgadze, State Security Minister of Georgia, 1993-1995: "We got ahold of several reports regarding the treatment of hepatitis C patients. What's so disturbing about them? According to the reports, 30 people died in December of 2015, another 30 people passed away in April of 2016, and another 13 people died in August of 2016".

There's no mention of the names of the patients in the documents, only their age and gender. Interestingly, out of the 30 people who passed away in December 2015, 24 died on the same day.

The papers also show the name of the drug allegedly used on the patients: Sovaldi. Gilead, an American pharmaceutical giant, first launched the drug as early as 2013. According to the manufacturers, it offers a response rate of almost 100% and has virtually no contraindications. But two years after its launch, dozens of people have died after taking the drug.

Aleksandr Predtechensky, Ph.D. in Biology, retired colonel, Medical Corps: "It begs the questions: where are the results of the autopsies? Where is information on pre-clinical studies of the drugs that were tested on these people? Why did the Pentagon have it done on foreign soil?"

US-funded laboratories similar to the Lugar Center exist in Kazakhstan, Uzbekistan, Kyrgyzstan, Tajikistan, and Azerbaijan. Ukraine even has two of them.

Gennadiy Onishchenko, Chief Sanitary Inspector, 1996-2013, member of the State Duma: “They're being built next to our borders. Why are they there? So experts can study the natural local diseases existing in the region, engineer respective viruses and bacteria, and find a way to mask an attack so that it looks like a natural event. Such labs are built to prepare for carrying out an attack. That's where experts come up with and use formulas for military-grade biological weapons. Those labs have no other application.”

Vladimir Markin, Ph.D. in Medicine, retired lieutenant colonel, Medical Corps: "Many Western countries, including the United States, are currently busy collecting biological material from Russian citizens for some reason. I'm not sure why other countries would need it. They claim it's needed for scientific research. You'd think they have better things to worry about".

Jeffrey Silverman, a journalist and a former adviser of Mikheil Saakashvili, is convinced that the Lugar lab is not a civilian facility, but a military one.

Jeffrey Silverman, journalist: "It doesn't take long to weaponize a vaccine. You can even weaponize a human. You can infect a person with a virus, put them on a plane, and send them anywhere in the world".

If the American journalist is right, the Lugar Center is in a perfect location. It's right next to Tbilisi International Airport. There're also two military bases nearby: Soganlug and Vaziani. By the way, the latter is regularly used as a training ground for NATO soldiers and for joint US-Georgian military drills.

Jeffrey Silverman: "There are biological agents and hazardous substances here. They can be used as a weapon. Do you remember how a few years ago people were dying of swine flu in Georgia and southern Russia? It wasn't an accident. And this may not only be a story about the use of biological weapons, but also one about poison gas. I work for a publisher that deals with military intelligence. We conducted an investigation and found out that there was a delivery of poisonous gas sent from here to Turkey. The gas was then used in Syria. It was a provocation needed to justify the use of force against Assad".

These copies of patents from the Lugar Center don't seem that unrealistic after all. The patents describe a quadcopter that spreads infected bugs and ammunition loaded with toxic substances. Such devices definitely can't be used for medical purposes.

Igor Giorgadze: "Out of all the documents that we have, we've only published 1% so far. However, even these few papers point to the fact that the Lugar lab poses a threat. If they're regular medical workers concerned about the health of the nation, then why would they need a means of disseminating biological agents?"

The Russian Ministry of Defense has already started analyzing the documents published by Giorgadze. According to experts, the materials may reveal violations of the Biological Weapons Convention committed by the United States.