Putin: US Russophobia Reminds of Anti-Semitism 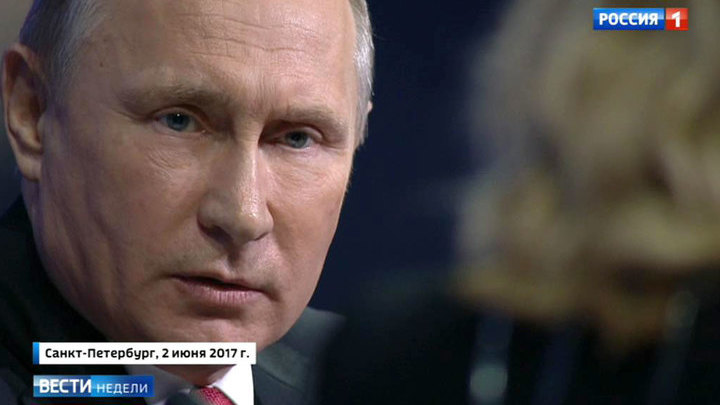 Perhaps the most vivid international event of the past week is the St. Petersburg International Economic Forum with the participation of President Putin and Prime Minister of India Modi. Heads of other countries, UN Secretary General Guterres, as well as the leaders of large and medium-sized businesses from around the world.

The St. Petersburg Forum is traditionally a platform for understanding business opportunities in the context of changes in world politics. Perhaps the main change this year was Russophobia, spread to the world from the US, like a contagious disease. Russophobia is a weapon that seems to be used against Russia. A mental weapon. Earlier, the Jews were to blame for everything. This is anti-Semitism, with which Germany, in its time, justified its terrible crimes, which were condemned at the Nuremberg Trials.

Now, instead of anti-Semitism there is Russophobia. Now the Russians are to blame for everything, even in Hillary Clinton's loss. They do not want to admit this mistake. They don't want to say that they are like that, sorry, have not caught something, have not thought something through. It's easier to say we aren't guilty, the Russians are to blame, they interfered in our elections. But we are good. Overall, this reminds me of anti-Semitism: Jews are to blame for everything, you see? You are stupid and can't do anything, but Jews are to blame.

Putin, to the theme of Russophobia as a new factor in modern international politics, which also affects businesses, returned at the Forum more than once. This is because last year there were no such hysterics towards Russia. It was after the autumn US elections that the theme of Russian hackers, Russian "hybrid wars," Moscow's encroachment on the foundations of democracy in the US, the demonization of Russia, unfounded accusations against our media, the threat of new sanctions against Russia, hysteria over our actions against the terrorists in Syria, and McCain's Russophobic attacks, who said on Monday that Putin is more dangerous than ISIS. All of this became aggravated and spread to Europe. Probably, like never before.

Today in the US, the wicked image of our country is lovingly cultivated, and is broadcast across the planet with complete power of the Western press. Although the fear of Russia in the West is not new. Exactly about this we spoke with the rector of MGIMO, academician Anatoly Torkunov, at the St. Petersburg Forum. Anatoly Vasilievich recalled that Russophobia in Europe began as far back as the 11th century, since the split of Christianity into the western and eastern branches. Our Orthodoxy, inherited from Byzantium, even back then aroused fear in Europe. And also unjustified.

After all, the Russian Orthodox Church, for example, did not sully itself with the barbarity of the Crusades, nor the Inquisition. Again, fear was caused by Russia's vast expanses. Continuing to reflect on the topic, academician Torkunov very accurately alluded to the famous philosopher Ivan Ilyin, who in the middle of the last century, when he was forced to emigrate to Switzerland, wrote: Europeans need a stupid Russia, barbaric: in order to civilize it in their own way; Threatening in its size: to be dismembered; Aggressive: to organize a coalition against it; Reactionary: to justify a revolution inside it; Religiously disintegrating: to break into it with the propaganda of the Reformation or Catholicism; Economically-insolvent: in order to lay claims to its unused lands, to its raw materials. Can't be said better. As if it was written today.

Russophobic hysteria in our days has taken such a high note that last Sunday the US TV channel NBC, the ex-head of US intelligence James Clapper talked of Russian depravity at the genetic level. The historical practices of Russians, who are typically almost genetically driven to co-opt, penetrate, gain favor, etc., these are all typical Russian techniques. Generally speaking, it's funny if you look at the US practice of intervention, and the succession of states they destroyed, from Yugoslavia and Iraq to Ukraine. But of course it's the Russians who are genetically evil. Russophobia in the West is, of course, an old hobby. But for today's wave of the epidemic, carried from the US, especially severe forms are characteristic.

Thus, Priit Hõbemägi, a strange University of Tallinn professor, was excited this Wednesday. With fierce seriousness, he declared war on the children's cartoon from Russia, Masha and the Bear. This bear, in his opinion, softens too much the right idea about ​​a Russian bear, ready to tear anyone. This is a struggle for minds, part of the hybrid warfare, in which the negative image of Russia is replaced by a positive one. Russia is perceived without filters. Russia is a wonderful country where Masha and the Bear live. The matter is that Russia is trying to weaken Estonia's foundations. Imposing on children a positive image of Russia is dangerous for Estonia's security. That is, even the bear in our cartoons is not like they need. We like the kind one, and they need another one from us: evil, growling, with blood dripping from its claws, huge and wild, just like you and me. For the same reasons, Professor Hõbemägi does not like Winnie the Pooh also. Where we're going with piglet, is a big, big secret! And we won't tell it to anyone, no and no and!

Speaking at the St. Petersburg Forum on anti-Russian paranoia in the West, particularly in US, Putin expressed confidence that this gushing wave will soon recede. The current attack, according to the Russian President, is also due to the fact that the party that lost in the Presidential election is not ready to admit its defeat, and what's easier than to blame everything on Russians. This is the transfer, I will stress again, of internal political squabbles in the United States to an external arena. It's an attempt to resolve internal domestic issues using foreign policy instruments.

Turning to the American TV presenter, blonde Megyn Kelly, who led the plenary session in a journalistic manner relevant to the US, Putin asked her with some irony: Stop it! Stop this. Overall, the St. Petersburg Forum made a very optimistic impression.